Hack the Entrepreneur: How to Stop Procrastinating, Build a Business, and Do Work That Matters 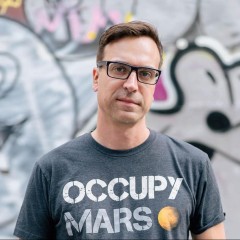 I was violently shaking.

Standing on the side of the pool at the age of 8, I was being told to jump straight into the deep end. My swimming instructor, in the pool and quickly losing patience with me, was calling for me to jump.

“I can’t do it,” I muttered through chattering teeth, “I can’t swim.” Not only did I not know how to swim, but I was terrified of the water. So how could she expect me to jump in and swim to the other side of the pool?

As terror bounced around my brain, someone ran up behind me and shoved me into the water. I panicked and went under, but then I regained my sense of time and place. I flailed my arms and kicked my legs as if my life depended on it. Then it happened.

I began to tread water. Not swimming laps, but surviving.

No one expects you to jump in and immediately start swimming laps. It’s far more likely that you will jump in and flail about. Then at some point, something will change your life forever and you will begin to tread water.

For an entrepreneur, treading water refers to projects, clients, and freelance work. But first you have to get in the pool. You have to start.

This post is a preview of my new book Hack the Entrepreneur, and both are intended to push you into the pool—and then learn to tread water and begin to swim. But I’m not just offering my advice; I’m delivering some of the best bits of wisdom gathered from more than 200 interviews I’ve done for the Hack the Entrepreneur podcast, to help you take the plunge.

During the early months when you begin to tread water, you will realize (as I did many years ago) that you are not going to drown. You could, in fact, tread water for months or years before you figure out how to swim laps.

This is a phase of entrepreneurship you will want to push past quickly, but it is the time in your life that you will later look back on with admiration. Like your first kiss or the first concert you ever went to, your first business is something you never forget. Treading water is your first step towards doing work that matters.

The New Rules of Business

The rules that once determined and defined how ideas were brought to market have disappeared.

The rules that said where and when we worked have been replaced with coffee shops and late-night mastermind sessions.

The bank loan to take an idea to market has been replaced with the $100 startup.

Running one business for the rest of your life has been replaced by running portfolio businesses—multiple, income-generating businesses with you as the only consistent variable.

It wasn’t long ago when we were told to go to business school, come up with an idea, get funding, start a business, hire employees, and rent a large office space for said employees to work in. That is no longer the case.

Business school is not where you go to start a business—it is where you go to learn to work within someone else’s business. Maybe that’s what you want, or maybe it’s not.

Starting a business is how you learn to start a business.

You are not supposed to know the ins and the outs of starting, running, and growing a business. You learn those skills along the way.

Business has fundamentally changed in a way that enables entrepreneurs like us to take action and build significant businesses, only bound by our ambition and desire to be remarkable.

Those changes have opened up the market for us to create and profit under the new school of business. This new school will enable you to reach your goals and live the life that you’ve been wanting to live. And the best part is, it doesn’t involve any “actual” school.

It requires you to think, work, and act boldly.

Welcome to Hack the Entrepreneur

Sitting down over coffee and talking business has always been a passion of mine. Because of that, I have spent a large portion of my working life picking the brains of those who walked the entrepreneurial path before me.

More than 200 interviews and 1.4 million downloads of the Hack the Entrepreneur podcast later, I’m ready to give you the best hacks.

So I turned the knowledge that I’ve gleaned from these interviews into a book. From the conversations, I have chosen the 50 best “hacks,” not the tips from the biggest names—although some of them are definitely in there—but based on what and who will help you move from getting started in business to scaling far beyond your wildest dreams.

Hack the Entrepreneur contains brilliant business insights from the founders of companies with hundreds of employees and hundreds of millions in revenue, but also from founders who run highly profitable businesses from their laptops as they nomadically travel the world, looking for adventure. Do not underestimate what you, your laptop, a good wifi connection, and some hard work can accomplish.

Both groups are extremely successful in their own ways, and both will teach you how businesses run under the new rules. The following is a preview of some of these rules, as told by some of the leaders in their fields.

These are the new rules of business. Get used to them, or keep your day job. “I had known I wanted to start a company for a while, but it’s difficult to walk away from a paycheck. It was a hard decision that took me longer than I would have liked.

It was easy to see how I could be making more money working for bigger, more established institutions, so I drew two lines to compare.

I drew a line of stability and predictability at a high level of income, where I would be if I had stayed in the path I was in. I then drew a second, lower line that would be what I could expect as an entrepreneur: bootstrapping a company, not paying myself a salary for a few years trying to make ends meet, and with more uncertainty in the long term.”

It is crucial to know that there are different paths to the same end. Most of us follow our guts, but Jon decided to think it through.

There is no right or wrong approach—just follow the method that feels right to you. We have to figure out for ourselves what will shift our mindset in order to take the leap. “So-called lucky people aren’t necessarily getting more advantages than other people. The universe doesn’t favor them, but they’re putting themselves out there more. They’re creating more connections that could lead to other stuff. That is really how I interpret luck: creating more of a mathematical probability that you’re going to get what you want.”

Luck’s a funny thing, isn’t it? As Russ says, it is about creating a mathematical probability by putting yourself out there and trying more things. When you start a business, it might fail. You might have to create 10 businesses before one will be successful. From a personal perspective, nothing frustrates me more than people telling me I am lucky. We make our luck with the decisions we make and the actions we take. Plain and simple. “The evolution of creatures depends on the ecosystem: animals adapt because that’s what the ecosystem demands, not because they want to. The same thing applies to your ideas: it doesn’t really matter what you want—it’s about what the market wants. You have to listen to the ecosystem or you’ll die.

Your business partially comes down to you and partially to the ability to destroy anything, no matter how good you feel about it.

The main point is to avoid emotional attachment and to be willing to destroy something at any time in order to rebuild it.”

Every idea that you have will not immediately be able to jump as far as it needs to. You will need to listen to the market and adapt to the feedback. The ability and willingness to destroy your ideas and rebuild them as necessary, is your ability to succeed as an entrepreneur. “In the startup world, people usually think ideas have a much higher value than they really do. The value of an idea is its impact once it is implemented.”

We all have ideas that we consider million-dollar ideas, but they are useless until we do something with them. The value of an idea is only realized during its execution.

Whatever you do, don’t covet your ideas. It bothers me when someone tells me, “I have a brilliant idea, but I can only tell you little bits of it.” I’m not going to steal your idea. The reason I don’t implement more ideas isn’t due to a lack of ideas for businesses to start, but due to a lack of resources: I don’t have enough time and people who can work with me. Even though the ideas are there, we can only do so much. “You don’t climb straight from nothing to something big. You hit an obstacle, climb over it, and reach the next level of the plateau. You cross the line again, cross another obstacle, and climb to the next level again.

The more you do that, the more you will look back and realize how far you’ve come. It is all about overcoming each obstacle as it hits and not giving up.”

There is no such thing as smooth sailing. Nevertheless, when you fall while climbing an obstacle, you simply land back on the plateau you were just on. You don’t have to start from scratch again.

When I was younger and read a lot of business books, I was fascinated by Donald Trump. He would build hotels and other buildings, go bankrupt, and then build the next Taj Mahal, so to speak. How do you go from bankruptcy to that? It’s simple: He fell back on the plateau he was just on and tried again. You don’t have to start at the bottom once you’ve leveled up to the next plateau.

It’s Your Turn to Take Action

Every day, people are living inspired lives built upon their art, their passions, and their ideas, not because someone gave them permission, but because they decided that this was their time and they weren’t going to be satisfied if they missed it.

It is no longer a question of whether they will let you. It is simply: Will you?

We live in a time and place where you have the power to control your future. Today, you could start a blog in less than 10 minutes, write a post that resonates with a few people, and through social media be read by more people than a post published by The New York Times. Seems unlikely, doesn’t it? Yet it happens almost every day.

We no longer need approval, so don’t wait for someone else to tell you to start.

However, if that’s what you’re waiting for…

Go ahead, jump in the pool.

Jon Nastor helps professionals scale and automate their businesses beyond content marketing. He is the founder of LSAT Clarity and the creator and host of Hack the Entrepreneur, where he has interviewed 483 entrepreneurs from around the world and received 5.4 million downloads, since its launch in 2015. Contributor to Copyblogger, Entrepreneur, and Business.com. Connect with Jon on LinkedIn.