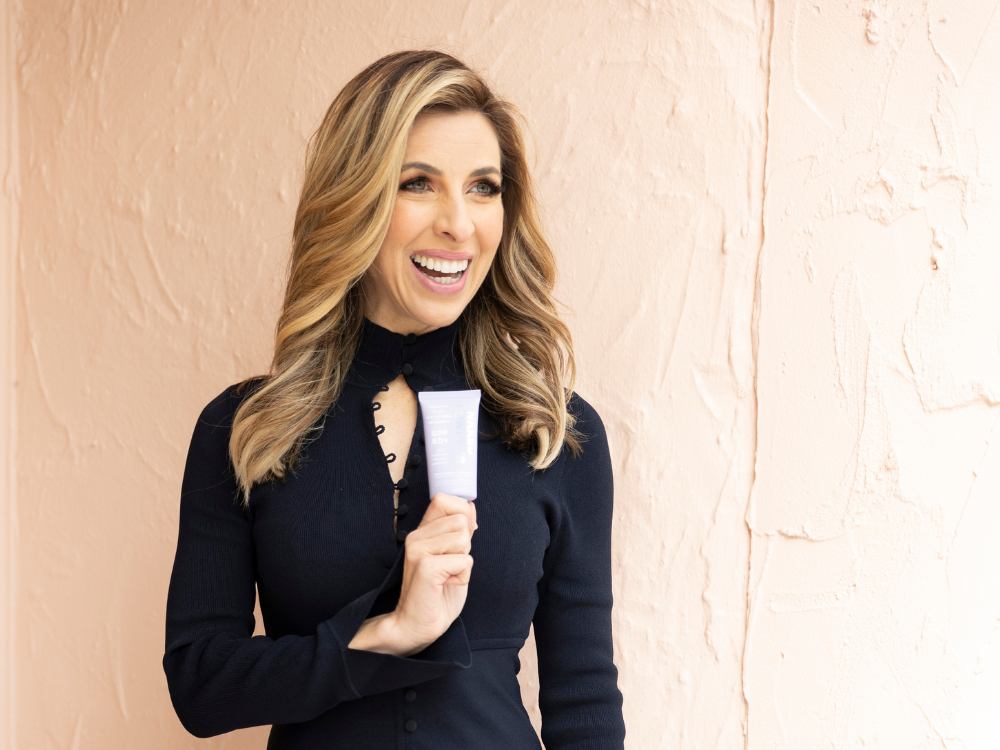 Samantha Brett may seem like an overnight success. Her business, Naked Sundays, launched in January 2021 and reached six figures in sales in a mere 4 weeks.

But in reality, Brett’s success came from years of preparation.

“This isn’t a quick fix,” Brett says. “I honestly spent a year and a half listening and learning.”

Naked Sundays began when Samantha was a news reporter for 10 years outside and on the road. She noticed many of her colleagues struggled with skin cancer because of the torrential Australian heat. Unfortunately, typical sunscreen lasts only 90 minutes, and there is no way to top up SPF over makeup at that time without leaving a greasy mess, which is not ideal for TV. So, she started thinking of a way to create a spray that could be used for makeup, but that was high-performance SPF and good for your skin.

“I wanted these products to reflect your authentic [and] cool self as much as possible—making sunscreen cool and simple,” Brett says.

From that initial challenge to beat the heat, has emerged Australia’s newest #1 SPF skincare brand. Read on to learn how Brett made it happen.

Before Brett started formulating a product idea, she surveyed 2,000 millennials about what they didn’t like about sunscreen. The consensus was that sunscreen (specifically SPF 50) is white, sticky, and bad for your skin. So Brett reverse-engineered a product to solve these problems.

“I just knew what I wanted in the sunscreens, and it was up to me and the manufacturer to work out how to get it in,” Brett says. Thus began a nine-month manufacturing process to create the perfect formula.

“[Nathan and Gretta] have been my mentors even though they don’t know me,” Brett says. “It’s not that I followed a formula, but it’s that I consumed all this information and then took the course as well.”

By applying the lessons and frameworks from Foundr, Brett started building an audience on Instagram a year before she had a product. Her conversations with her community helped her craft a brand that reflected people’s authentic selves, just as they are on a typical Sunday—hence the catchy name, Naked Sundays.

Engaging with her community taught Brett a critical lesson:

“It’s not about [the number of] followers. It’s about keeping your tribe engaged.”

In keeping with her community’s values, it was important for Brett to make her sunscreen cruelty-free. This meant she needed to develop vegan collagen from scratch using plant-based ingredients. She also had to create the sunscreen in a spray form to solve another challenge identified by her community: how to apply sunscreen without messing up makeup.

“It [was] a long phase,” Brett says of this period of trial and error. “But that being said, all my dreams came true.”

With a dream product in development, Brett now needed to create a brand look and feel that reflected her passion for authenticity.

“I always knew I wanted to have a big logo on the side [of the bottle],” Brett says. “I didn’t realize that’s a massive challenge for designers, because bottles are small and [logos are] hard to get on in that way.”

After going through multiple designers, she met one from San Francisco who achieved her vision of simplicity, elegance, and beauty, featuring the warm color of lilac.

“When you see a design that sings to your heart, you just have to go with it,” Brett says.

Ironically, lilac was never Brett’s favorite color. But now it’s across all her products and branding.

“It came into the market when lilac wasn’t saturating Instagram,” Brett says. “Lilac has now become synonymous with Naked Sundays.”

The next step was the business launch. Surprisingly, Brett waited a month after her products were delivered to start selling.

“Everything takes really, really, long,” Brett says. Instead of pushing for an early launch, she took time to master her Shopify store and polish the branding.

“When I stopped rushing, that’s when the magic happened.”

Brett put her products live on her Shopify store in December 2021, intending to do an official public launch in February. But then fate took over.

“An influencer got hold of the products,” Brett says. “Suddenly I started getting DMs […] and people started buying.”

Thankfully, all of Brett’s early preparation had paid off, and the product was ready to go. She closed the site, created a waiting list, and within a week launched Naked Sundays to a tribe of anticipating followers.

“For the next 48 hours, I was walking around in shock,” Brett says.

Within four weeks, Naked Sundays hit six figures in sales, which was Brett’s revenue goal for her first full year. Even though she was surprised by the speed of her brand’s success, Brett was confident in her product because of the previous year’s work.

“I live and breathe this stuff. It’s not by chance,” she says.

It didn’t take long for the media and business worlds to catch wind of Brett’s success.

Naked Sundays won the 2022 Mecca Beauty Innovation Award and is now Australia’s #1 SPF skincare brand. Brett is thrilled that her products are helping people with a problem she invested so much time in solving.

“I love the fact that it’s become a habit for people now,” Brett says. “Once you get used to [using the sunscreen], it becomes a part of your life.”

Her advice for entrepreneurs is to keep your team small and focused on your mission. The Naked Sundays team is made up of contractors, mostly friends of Brett, who are bringing their own passion to the brand.

“Create a culture where people share your vision and your message, as opposed to hiring staff and agencies that are just doing it as another job,” Brett says.

For other founders in the early stages of starting a business, Brett says it’s important to make sure you’re prepared to put your heart and soul into your idea. And be patient.

“Do not think, ‘I have a great idea; I’m going to be successful,’” Brett says. “It’s [not] the ‘great idea’ [that creates a successful business]. It’s everything around it.”

With plans for more products and sustained growth, everything around Naked Sundays is pointing to a bright future ahead.

Get the same frameworks that Samantha used to launch and grow Naked Sundays by exploring foundr+. 3 Small Business Branding Tips to Rise Above the Competition